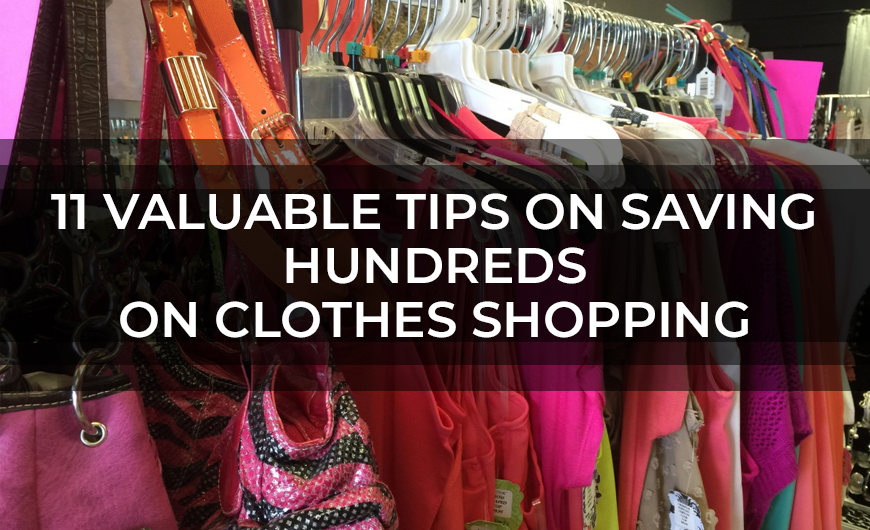 Birds of a feather flock together, the clothes make the man, dress for the job you want, first impressions matter: clearly, if you want to be accepted, stand out and get ahead, good wardrobe choices are as important as having a nice personality. This shouldn’t mean that you have to go bankrupt dressing for success, and in fact it doesn’t. You can still look like a million dollars while still saving hundreds on clothes shopping.

Fashion companies invest over a billion dollars a year on ads designed to make you spend more than you need to on clothes. This is definitely not because they care whether you look good, which you will if you try out these tips on saving money while clothes shopping.

Ditch Fads and Fashion in Favor of Style and Substance

There’s a reason nobody actually wears these ridiculous catwalk outfits:

High fashion seems to be a game that’s interesting only to the people playing it; it’s less about what outfits you’ll find in stores than it is an art form on its own.

Popular fashion, on the other hand, changes without any rhyme or reason. People copy what they see others wearing on TV, without realizing that each new trend will likely die out within a few months. Then, it will be replaced by another that tries to cram all people and personalities into the same mold. Branded clothing is a very similar trap: a shirt that’s worth $50 doesn’t magically double its value with a little embroidered symbol, especially if you’re going to wear it under another layer of clothing.

Here’s a little secret that many people apparently can’t figure out: there is absolutely no need for you to follow the other lemmings. Once you establish what kinds of outfit best reflect your temperament and lifestyle, every new garment you buy will naturally find a place in your wardrobe. You’ll no longer pay for anything you end up never wearing, and you’ll see that choosing what to put on every morning becomes much, much easier.

Figure out what Kind of Clothes Looks Good on You

The sad truth is that we are not all supermodels – if we were, doctors all over the world would be panicking. Not being super-skinny is nothing to be ashamed about: not every woman wants to have the body of a pre-pubescent boy, nor does every man need bulging pectorals to feel good about himself. (Note that body positivity doesn’t mean not taking care of yourself; staying healthy is about a lot more than meeting an arbitrary standard of beauty).

Many clothing manufacturers, unfortunately, still seem not to have cottoned on to the fact that most people don’t look like athletes. Like with an item that clashes with the rest of your wardrobe, you’re less likely to wear something that almost fits, meaning that it does little more than cost money and take up space in your wardrobe. To avoid buying unnecessary clothes, you have to be honest with yourself about where you have curves and where you don’t, as well as what patterns and shades make you look your best.

This isn’t all that difficult, especially if you have a measuring tape (roughly the same principles apply to men). Once you have this down, you’ll have a much better idea of what sort of garments you should be seeking out. You’ll still have to try them on, of course, and actually check how they look from the back – even though you don’t normally see yourself from that angle, other people certainly do.

Save More by Spending More

Cheap and expensive clothes are not, as it were, cut from the same cloth. Your perception of an alleged bargain will change a lot once you realize that it’s not the price of a pair of jeans that matters, but rather how much it costs you over its entire lifespan. A cheap T-shirt that starts to fade after three washes is more expensive, in practical terms, than a more costly, more durable one.

In the case of jeans, you’ll not have to look far for a pair that costs $15 or even less. Comparing that with a $200 pair, or even one that’s custom-made to your measurements, this just seems like a waste of fifteen dollars. More expensive clothes almost always fit better, last longer, feel more comfortable and keep their appearance even if you abuse them in the wash.

Buying quality clothing also forces you to think twice about each new item: you have to hesitate before dropping a large chunk of a month’s salary on a new jacket. If you realize that you’re not really sure about the style or fit, you may have just avoided buying an expensive white elephant you only kind-of like.

Know Beforehand How Much You Have to Spend

Unless you have the kind of job the rest of us can only dream of, it’s essential that you – deliberately and in writing – make a list of all your expenses and calculate how much money you have available to spend on things that make you happy. Doing this can be tough, especially to begin with, but you’ll find it much easier to save money on clothes shopping once you can clearly see how splurging will affect the other areas of your life.

Some people go shopping for clothes whenever they need to replace some item or just want to cheer themselves up, others make monthly trips, others get everything they’ll need for the coming season every three months. Either way, one technique that works surprisingly well is to count out the exact amount you’re allowing yourself to spend (plus a little extra for parking, snacks, etc.) in cash and leaving the credit cards at home.

You can also put this money in an envelope marked: “Dressed to kill” and take cash from it as needed – once it’s empty, you’ll have to make do with what’s in the closet until it’s time to refill it. Temptation is a formidable beast, and once it gets you in its jaws you may wind up wondering how in the world you ended up with a leopard-print scarf costing $20. Spending physical currency reminds you that you’re making a sacrifice, far more effectively than handing over a credit card does.

It’s truly amazing what you can sometimes dig up in second-hand and charity stores, especially those near affluent or middle-class neighborhoods. Some people obviously don’t care about saving money when clothes shopping: you may not like the idea of pawing through their scraps, but this is one of the best ways of picking up genuine designer brands for a song. Even if they’re a year or two old, this is still better than getting a knockoff with poor stitching and material.

Buying second-hand isn’t just easier on your budget. Once you have a good idea of your personal style and how different cuts of clothes look on you, you may well find that stores with several dozen examples of the same item in different sizes are kind of boring. Places like Goodwill and the Salvation Army offer a wider variety, including vintage articles you’d pay a ton for anywhere else.

When it comes to saving money on clothes shopping, timing is everything – but only if you plan ahead. Taking advantage of sales, coupons and cashback has become something of an art we don’t have anything like the space to cover here, but a few general tips may be enough to get you started:

Learn How to Do Your Own Alterations

Let’s say that you find the perfect pair of pants, perhaps on sale. They’re a little large for you, though…once you’ve had them hemmed and taken in at the waist, the actual price may have risen by $30 or more. Talk about the opposite of tightening your belt!

Some stores do offer this service for free, but it’s also well worth knowing how to do them yourself. The same skills will also save you money on minor clothing repairs, like when a zipper on an otherwise immaculate garment has given up the ghost, or for repurposing old clothes into quirky masterpieces.

Get Rid of Everything You Don’t Wear

Especially in apartments, closet space tends to be at a premium. Making good fashion choices on a day-to-day basis becomes that much harder if you clutter it up with stuff you kinda like, but never actually wear. It’s also easy to end up with too many clothes in one category, like having half a dozen pairs of nearly identical work pants.

There are a couple of ways to clear out the jumble that will let you save some money you can spend on new clothes – you may even discover a treasure you’d forgotten you had at the bottom of some drawer. First of all, if you choose to give your unwanted clothes to charity, make sure to mention that you’ll be taking a tax deduction and get a receipt (and remember that not everything is suitable for donation anyway).

Alternatively, you can arrange a clothes swap party: get half a dozen of your friends together over a bottle of wine and see if one’s trash is another’s treasure. Finally, especially with brand-name and sought-after items, you may be able to sell them online or, for clothes your kids have outgrown, exchange them. It’s unlikely that you’ll make a huge profit but, as we all know, some months every dollar helps.

Don’t Buy What You Can Rent

Wedding dresses are the ultimate example of (hopefully) single-use clothing. Buying one will set you back at least a thousand dollars if you have something gorgeous in mind, and they really don’t keep their value that well. Yet you can rent a very similar gown for about $100.

Designer clothing, formal wear, and even Halloween costumes can all be rented cheaply (or borrowed if you have a friend who wears the same size). If you like to shake up your look as often as you can, you may even want to look into monthly subscription services for both work and casual apparel.

Get to Know Your Laundry

The best way to save money when shopping for clothes is to buy for the long haul. Anything that will wear out quickly, trendy items that will only be embarrassing next month, or stuff you’ll want to discard after wearing it a few times shouldn’t make it to the checkout counter.

In addition, it’s a real shame when something you really like deteriorates to the point where it’s only good for sleeping in. This is why it’s worth learning how to take good care of your clothes and thus putting off the day when you’ll have to replace them.

It’s strange when you think about it: an entire science exists devoted to the subject of making you buy stuff you don’t really want to, or at least get you to buy necessities from one store instead of another. Some of this involves dirty tricks or at least manipulative tactics. It’s worth being able to recognize these, but be warned: it’s been proven that at least some of them are effective even when you know you’re being influenced.

In the end, exhibiting confidence and owning your look is at least as important as the price of the clothes you wear. Owning a closet full of high-quality garments doesn’t hurt, of course, but only as long as these are an extension of your own unique personality and not just an attempt at showing off.

Indeed, dressing well isn’t about how much you spend but about how you spend it. Style and conspicuous consumption don’t mix very often. Perhaps you know of a few examples of this, or just want to share your own tips about saving money on clothes shopping? The comments section is wide open, so don’t hesitate to share.