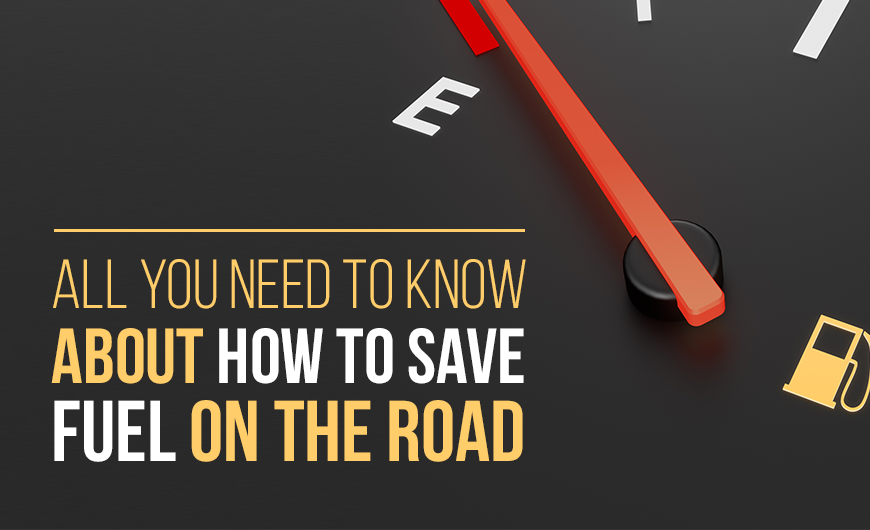 Joseph
Save MoneySkills
Spread the love

Most driving instruction focuses on three areas: how not to bump into things, how not to get a ticket, and (optionally) how to avoid irking other road users. Fuel economy tends to hardly get mentioned. The difference to your gas bill can be pretty significant, though, as we’ll try to show you in this article: you can save up to 30% at highway speeds and as much as 40% in the city just by following a few simple guidelines. As a side bonus, you’ll also be helping to save the planet. This isn’t your sole responsibility, of course, but every little bit helps Mother Earth. Let’s take a look at how easy this can be:

Plan Ahead, Slow Down

If you regularly have to exceed the speed limit, chances are that you simply need to work on your time management skills. You can avoid a pretty significant amount of stress just by never having to worry about being late – and you’ll save a lot on gas besides. Moreover, thinking ahead often allows you to combine two or three trips into one, not only cutting down on the distance you have to cover but also reducing the amount of time during which your engine is running cold and therefore inefficiently.

Let’s talk about speed for a moment. We all have a kind of intuitive idea of what friction is: when it comes to driving, it’s usually a bad thing (except when we’re talking about braking, at which time it becomes kind of important). The thing to understand here is that air resistance increases (roughly) as the square of speed. Going just a little faster, in other words, means that your car has to push forward a lot harder just to overcome the force of the wind:

These values were calculated for a typical mid-range sedan. Don’t worry too much about the specific numbers, though: just soak in how much even moderate speeding on the highway increases your fuel costs (and take a moment to appreciate all your windshield does for you).

As a rule of thumb, you can think of every 5 m.p.h. over 50 as making your gasoline cost 20 ¢/gallon more than it should. To put this into perspective, this makes a difference of only a few minutes over a 20-mile trip – hardly enough for a bathroom break. Keeping to the speed limit is also not just about how to save fuel: a traffic ticket becomes much less likely, as does getting into a serious accident.

In Town: Be a Chauffeur, Not a Drag Racer

Basic physics tells us that it takes energy, meaning fuel, to push something and make it go faster. The harder you push, the more energy is expended. Knowing this, which of these drivers do you think knows how to save fuel?

Unless you’re lucky enough to own a car that features regenerative braking, all that power you expend on going “vroom, vroom” simply goes up in smoke, with no net benefit. When stop signs and traffic lights are involved, a Ferrari and a Volkswagen have exactly the same average speed.

A smoother ride is also a lot better for your car’s suspension and brakes, as well as more comfortable for passengers. The only time you will want to get to the next intersection as quickly as possible is in older cities with plenty of cars and little space between stops. Otherwise, people behind you may not be able to move on to the next block and end up causing a traffic jam.

On the Interstate: Control Your Cruise

In much the same way, it takes more fuel to regain speed you’ve lost on the highway than simply maintaining the same rate of travel. Setting your vehicle on cruise control allows you to watch the road rather than the speedometer – studies show that this alone can save you about 3½% on average highways, rising to between 8% and 16% if you use the economy cruise control setting (which will increase your travel time slightly).

Don’t take this as infallible wisdom, though. Driving on cruise control, or simply nursing the accelerator pedal, regulates the flow of fuel based on how fast the wheels are turning and little else. How can you save fuel while driving on hills if you don’t also take factors like engine torque into account? In hilly areas, you’re better off slowing down by about 10 mph on steep grades and increasing your speed by the same amount when going downhill (assuming that no cops are around to complain about your eco-friendly speeding).

Cars’ onboard computers are getting steadily smarter, so a modern vehicle may be able to compensate for increased loads without you having to do a thing. Most still can’t see the road ahead, though, so you should also not be shy about overriding the cruise control when the situation merits: if you see traffic bunching up ahead, for instance, or you’re coming up on a bend that’s best taken at reduced speed. This kind of thoughtful driving becomes a lot simpler when you maintain a decent following distance: one driving technique that could increase your fuel economy is to simply not tailgate.

Take a Load Off

Cargo and “car, go” aren’t the best of friends. Every extra pound of weight you haul around decreases your fuel economy – Formula One cars even use special lightweight paint in order to go faster while using less fuel. It’s estimated that every 100 lbs of weight adds one percent to your fuel costs. That’s not a lot, perhaps, but may be enough to motivate you to clean out all the odds and ends that have been rolling around in your trunk for the last couple of weeks (keep your roadside emergency kit, though).

Beyond the question of weight, roof-mounted storage also increases your car’s aerodynamic drag significantly, no matter how streamlined the box looks. These are nothing short of fantastic when you need one, but make a point of removing it unless you need the space for luggage. Racks for bicycles, skis and the like may seem like they aren’t large enough to make much of a difference, but you may be surprised at how much they increase your fuel consumption at highway speeds: up to 16% at 75 mph.

Idling Engines Do the Devil’s Work

In Japanese cities, it’s pretty uncommon for people to leave the engine running while waiting for the light to change; in fact, most cars sold in that country switch it off and on again without the driver having to turn the key. As a pedestrian, it’s a little eerie to hear all those motors fall silent in the middle of rush hour.

For waits of longer than about 15 seconds, however, this does save fuel, not to mention keeping the air outside a lot fresher. This is a good reason to buy a car with an automatic stop/start: a vehicle with a 3,000-cc engine wastes about one cup of gasoline for every 10 minutes spent idling. Be careful doing this with older cars, though. If your battery isn’t all it used to be, or your starter has seen better days, you may end up stranded and in need of a push.

Have you noticed that almost everybody thinks they’re a better-than-average driver? This is one manifestation of a well-known psychological phenomenon that has important implications for anyone trying to figure out how to save on fuel. To put it a little bluntly: one driving technique that could increase your fuel economy is to acknowledge that you’re not doing as well as you could and adapt accordingly.

How does this work in practice? Firstly, you’ll want to set your in-car display, assuming you have one, to show your current and average fuel consumption by default. This gives you immediate feedback on how much you’ll be paying at the pumps later: is driving to work using surface streets better than using the highway, for instance? Is easing up on the accelerator really a good way to trade a little time for a little money?

As an added incentive to save money on fuel, you may also want to install a driver performance monitoring system in your car. Though a device like this doesn’t have any direct effect on fuel economy, studies show that it can save you an average of 6.6% on gas just by reminding you to practice good driving habits, including those mentioned above. Don’t let yourself be put off by how much some of these cost: your car insurance provider will most likely be happy to give you an equivalent discount on your premiums if you install one. The reason for this is simple: the driving patterns that help you save on fuel happen to be pretty much the same ones that can prevent you from getting into an accident.

We’ve left the most obvious way of paying less for fuel until last here; the reason for that is that we don’t think many people will even seriously consider it. Think about the following for a moment, though: compared to similarly wealthy countries, Americans drive an insane amount.

There are numerous reasons for this, from simple geography to the price of fuel (at the time of writing this, gasoline costs $5.86 per gallon in Great Britain). Let’s not, however, make the mistake of thinking that what we’re used to is necessarily normal.

A healthy person can easily walk a mile in 20 minutes, and doing so makes them that much more likely to stay healthy. Next time you’re about to hop into the car, take a moment to think about how much time driving will really save you. For longer journeys, a train may get you there just as quickly for less and, if you take your business online, you may not have to make the trip at all.

Many of these tips amount to no more than common sense. Others that are often taken at face value turn out not to have any effect at all: voodoo gadgets and DIY fuel additives, for instance, will do nothing for your gas mileage (if auto manufacturers knew how to save fuel in this way, these devices would already be standard on every new car).

In the end, saving money on fuel often comes down to what the driver is doing. This also means listening to your car: simply tracking your gas mileage will often give early warning of a maintenance issue that’s about to rear its head. If you notice a drop in efficiency, for instance, it may mean that you’re driving with a bad fuel injector that could end up causing serious engine damage if not taken care of promptly. If you’re willing to learn how to drive stick (and perhaps study up a little on what’s going on under the hood), fuel-efficient driving habits will soon become second nature – how can you save fuel while driving on hills with an automatic transmission?

How much have you saved using these and other guidelines? The proof is in the pudding, after all, so let us know how things have gone once you’ve made a conscious effort to save on fuel.