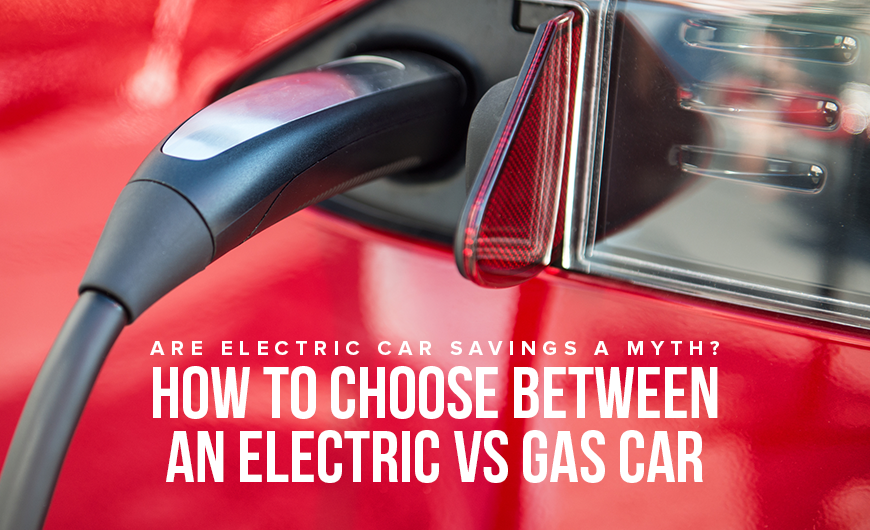 Are Electric Car Savings a Myth? How to Choose Between an Electric vs Gas Car

Joseph
Save MoneyUseful
Spread the love

We know, or at least hope, that they’re saving the planet, but do electric cars save money? Consumers seem to think so: in one recent survey undertaken in California, 37% of EV and hybrid owners said that spending less on gas was the primary reason for their purchase decision, followed by 21% who went electric due to environmental concerns.

Electric car savings aren’t the only thing conscientious car buyers are after, either. Especially since Tesla entered the high-performance motoring market, battery-powered cars are just incredibly cool and often a cut above the rest in terms of technology. Ordinary commuters, too, now have a variety of electric-only and hybrid options to suit any budget. Long-haul driving has become much easier thanks to better charging infrastructure and greater range on the latest models (though long charging times, particularly from empty, remain a concern), and early fears that the batteries will wear out as quickly as those on your phone have proven unfounded.

Still, though 71% of drivers say that they’re willing or even eager to consider buying an electric car at some point in the future, these still comprise under 2% of new vehicles sold in the United States. If the choice of getting an electric car vs gas model were totally clear-cut, this number would be far higher, so we have to ask: do electric cars save you money, or are you better off sticking with oil-burning transport and perhaps changing your driving habits?

Figuring out How Much Electric Cars vs Gas Cars Cost

This question isn’t as simple as you may think. In previous decades, when gas was cheap and many people did their own auto maintenance (or knew somebody who could), the main concern when buying a new car was its sticker price. Today, this is kind of a simplistic way to look at things. You really want to research the total cost of ownership of any big-ticket item, including:

To this, we can also add the accountancy concept of depreciation: ideally, you’ll put away or invest some cash every month to offset the amount by which your car’s value declines. Though this isn’t an expense in the sense that it takes money out of your wallet, planning ahead in this way will make it much easier to replace a vehicle when the time comes.

Making sense of all of this is a little more complicated than figuring out a vehicle’s gas mileage. Don’t worry, though: the issue of electric car cost vs gas has received a lot of attention recently, so there’s plenty of information available.

How Do Electric Cars Save Money?

From an engineering perspective, there are a couple of ways in which you’d expect to see electric cars save money. To begin with, internal combustion engines (i.e. those that burn gasoline or diesel) are inherently complex and contain hundreds of essential moving parts, all of which are bound to wear out eventually. Electric motors are practically toys by contrast, leading to lower maintenance costs. For one thing, they can operate without a transmission system, which saves money and increases reliability right off the bat.

In addition, electricity doesn’t have to be pumped or trucked to where it’s needed, decreasing the upstream costs of your “fuel”, and it can be generated from various sources. Let’s see how this works:

As mentioned, a bare-bones electric vehicle is mechanically simpler than an internal combustion car – in fact, the two were invented at about the same time. This doesn’t necessarily mean that electric cars save money on repairs and maintenance, though: many of them contain tons of bells and whistles in addition to the engine, body, and motor, there are fewer certified service centers and mechanics who will work on them, aftermarket or generic parts simply do not exist, and your car may have to be hauled away for some repairs. It’s a good thing EVs don’t break down as often as gas cars! On average, routine fluid and part replacements, such as tires and oil, on electric cars vs gas cars cost about half to three-quarters of what you’re used to.  There are, for instance, no spark plugs or engine oil to switch out, and brake pads last almost forever.

The flipside to this, of course, is that electric vehicles carry a higher base price. Unless you’re able to pay for one in cash, this also translates to higher finance charges on your auto loan, including interest. This is somewhat offset by the longer standard warranties on electric models, with periods of 8 years or 100,000 miles now being common.

Another important consideration is that you can sometimes knock up to $7,500 off the sticker price of a hybrid or electric-only vehicle. Occasionally, the government allows you to keep some of the money that was yours to begin with as long as you do things they’d like you to do. Both for environmental reasons and to stimulate the burgeoning renewable energy industry, this applies to electric car savings.

Note that this is a Federal tax credit; it’s not money in your pocket or a direct discount at the dealership. You will, however, see a reduction in your income tax bill or a larger refund at the beginning of the next tax cycle. Some states and utility companies also hand out incentives for purchasing a hybrid or electric car. These can add up to several thousand dollars, so be sure to check before you make your final electric car vs gas decision.

Figuring out how much you can claim gets complicated quickly. Though there is an upfront cost, asking for professional help may end up saving you a substantial chunk of cash. The amount depends on your tax status; you can’t, for instance, ask for more than you owe in tax.

Which manufacturer you buy from also plays a role – since part of the reason for this tax break is to help establish electric cars as a viable option, this incentive starts to run out once a company has produced 200,000 electric vehicles. This program therefore no longer applies to GM and Tesla cars.

Importantly, the rebate is based on your new vehicle’s battery capacity in kilowatt-hours, so there’s no difference in this sense between buying an economy or luxury model. Another requirement, which excludes many hybrids, is that the vehicle has to have the capability of charging from an external source, i.e. cars like non-plug-in Toyota RAV4 hybrids simply don’t qualify. Finally, the federal tax credit only applies to new vehicles: even though driving a used Volt has pretty much the same impact on air quality and energy usage, the government doesn’t reward you for doing so.

One thing that influences the long-term cost of owning an electric vs gas car is how much you can expect to get for it once you’re willing to move on. This is one aspect many car buyers overlook, especially as you can’t really know what your financial situation will be in five years or so. Don’t neglect to do your research, though: this is one consideration that may sway the equation of how much electric cars vs gas cars cost.

Estimating how much a car will be worth a few years down the road is based both on historical data and guesswork. Since there’s a limited track record with electric vs gas cars, nobody really knows what you’ll be able to get for your shiny new EV when it’s time to upgrade. Gas may have become really cheap by the year 2025, negating electric car savings – or carbon emissions could be taxed, giving electricity the edge. A large part of this comes down to future consumers’ attitudes to electric vs gas cars, and these are inherently difficult to predict.

Based on the data we have, though, electric cars depreciate significantly faster than comparable gas models, not least because newer, better technology comes out all the time. Teslas are the exception to this rule due to their intelligent and constantly updated onboard software. One recent over-the-air upgrade, for instance, improved the new Model 3’s range by a small but handy amount without any alterations to the batteries themselves.

Leasing an Electric vs Gas Car

The hefty price tag most new electric vehicles carry may well cause you to seriously consider a long-term rental instead. Indeed, depending on your personal circumstances and financial goals, leasing an electric car may well be the most economical option.

It’s also a great way to get your feet wet with electric vehicles. It’s probably not, however, the best option when it comes to taking advantage of electric car savings. In the first place, electric vehicles lose their value more quickly than those with conventional engines, which jacks up your leasing costs. In addition, there’s no federal tax credit for leasing, as this (if any) goes to the vehicle’s titleholder and may or may not affect the monthly lease payment amount. A third factor to consider is that the electric car vs gas cost equation tends to favor the former only when you drive plenty of miles in a year, and high-mileage lease contracts generally carry a considerable premium.

This is not to say that leasing an electric car is a bad idea. You should take a good look at any state incentives for doing so, though, and unless you have your heart set on driving a vehicle with zero tailpipe emissions, you should compare the available deals on electric vs gas cars on an even footing.

Buying and even leasing a car is at least a medium-term proposition. As 2020 (rest in peace) showed us all, a lot can happen over a year, so there’s yet another question we need to ask ourselves: do electric cars save you money if the cost of electricity or gas changes radically?

In terms of predictability, electric cars win out here. Electricity prices do change, but only gradually, as both supply and demand are reasonably inflexible. Petroleum production, by contrast, depends heavily on the political situation in some not-very-stable regions of the globe and may rise (or fall) comparatively rapidly. If you drive 20,000 miles each year and your gas-burning car gets 30 MPG, a $0.40 per gallon increase will cost you an additional $267 per year.

Doing the Math: Do Electric Cars Save You Money?

The question of whether electric cars vs gas cars cost less depends mainly on the timeframe you’re able to look at. If you just need a vehicle to get to work and back during the next year, one powered by an internal combustion engine will probably work out cheaper – for that year. If you’re able to plan further ahead, can afford a large down payment, and drive a lot, electric cars save money…but not necessarily a huge amount.

Let’s see how a couple of different scenarios would play out, using rough numbers. We definitely encourage you to draw up a similar calculation using the most accurate data you can find.

So, do electric cars save you money? In general, yes; however this rule isn’t set in stone:

Major financial decisions should never be made in haste. You’ll find plenty of reliable, specific information online regarding the electric cars vs gas cars cost debate, so don’t jump at the first “incredible deal” you see. There are also some less tangible considerations that can’t be ignored, such as whether you prefer to drive an electric car vs gas car (or feel slightly guilty about filling up the latter). Whichever direction you choose to go, though, you’ll feel much more content with your purchase if you know that it’s backed by solid financial analysis.

26 thoughts on “Are Electric Car Savings a Myth? How to Choose Between an Electric vs Gas Car”