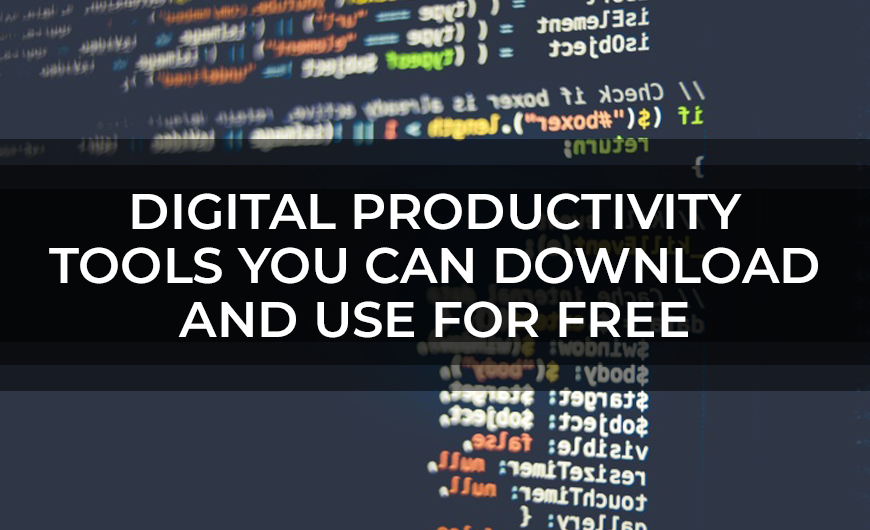 Digital Productivity Tools You can Download and Use for Free

A computer without the right software is little more than an expensive paperweight. The good news is that you don’t have to blow your budget on apps: in many cases, free software can help you accomplish your tasks and is often just as good as paid versions.

Sometimes, these programs are released as a public service or to allow coders to showcase their skills. They can also be used as marketing for a premium, paid version of the software that contains extra functionality, or voluntary donations are solicited from those who can afford them. Occasionally, software and online services make money by running ads or compiling marketing information on users. Whatever the business model, users can choose from a wealth of applications they don’t have to pay for – all you need to do is figure out what your best options are for the work you do on a daily basis.

The Microsoft Office package has long been a kind of standard in the workplace. With the subscription-based Microsoft 365, it’s now easier than ever before to create and share a variety of documents without having to worry about compatibility between different devices.

In addition, it’s a lot more powerful and easier to use than online document editors like Google Docs. Arguably, though, the majority of users will never use many of its advanced features – if this is the case with you, you may want to look into these completely free packages. For the most part, you’ll find that the word processor, spreadsheet program, graphic design app, equation editor, and presentation designer are no more difficult to use than the software you’re used to. It’s also completely free, even if you use it for business.

While LibreOffice is the more recent development, the two packages are very similar. They do have some bugs compared to paid office suites, but a little bit of googling will generally resolve any problems you have thanks to a large and supportive user community. However, unlike with Microsoft products, LibreOffice currently offers only limited cloud and multi-user editing support.

One of the most exciting aspects of the cloud-based world is how easy it makes coordinating remote workers: getting everybody on the same page while allowing every team member to get a comprehensive view of an entire project. Communication is key, after all, and email just isn’t always sufficient.

Slack is essentially just a chatroom, but with a number of powerful features that has made it a familiar feature in many companies. It works seamlessly on both desktop and mobile platforms, allows you to share files and make video calls, and integrates well with third-party services like Google Drive. There is a bit of a learning curve involved, but this tool’s capabilities will soon make it one of your favorite ways to keep up with what your colleagues are doing. Paid versions are available starting at $6.67 per month, but most small teams will manage just fine with the free version.

Trello is not so much a messaging app as a kanban board you can customize to suit a wide variety of processes and workflows. Each task is represented by a card that can be moved from left to right through various columns to indicate its progress. This gives everyone a clear view of a program’s status at a glance, including on mobile devices. While not a full project management suite, it’s very lightweight and easy to use whether you’re starting a business or planning a wedding. The free version does have a couple of limitations, most notably a maximum attachment size of 10 MB and integration with only a single additional service such as Slack, GitHub, or Salesforce.

Adobe Photoshop is a kind of gold standard in the world of graphic design. Unsurprisingly, this means that it’s definitely on the expensive side (even without the books and courses needed to get the most out of it). Unless you truly need professional-quality editing on a frequent basis, you may be just as well off with the totally free GIMP app.

Granted, its user interface is pretty clunky – expect to waste a lot of time trying to find your way the first few times, especially if you’re not very experienced with photo editing software. It is, however, rich in features. Pixelmator is significantly easier to use even though it doesn’t present you with the same breadth of options and costs only a fraction of Adobe products.

Windows Explorer does a fair job of displaying and moving files; most people won’t even realize that it’s possible to do much better. Multi Commander is a free tool that allows you to open multiple folders simultaneously using a tabbed view. In addition, it lets you customize its appearance as well as define your own keyboard shortcuts, makes it easy to access remote FTP servers, and offers powerful filter options to select or exclude multiple files at once.

TeraCopy is another nifty piece of software you don’t strictly speaking need but will leave you wondering how you ever got along without it. In the first place, it achieves faster file transfer rates than the built-in Windows utility, which comes in handy when backing up data to an external drive. More importantly, it can verify that files arrived at their destination without any errors creeping in and, in case it’s unable to read a file for some reason, will show you a list of skipped files you can look through manually.

Another area in which Windows falls short is searching through the filesystem. FileSeek addresses this lack: lightning fast, heavily customizable, and with the ability to use regular expressions.

Perhaps you’re still using a basic text editor for taking notes. It’s hard to stay organized in this way, though, especially if you need access to your scribbles on multiple devices. This is part of what EverNote makes simple, syncing seamlessly across virtually all platforms and even offering an in-browser version.

All kinds of files can be attached to a note, with a powerful search function that allows you to search for text even in images. Sadly, the free version of EverNote comes with some major limitations: you can’t save a notebook to view it offline, and you’re restricted to only 60 megabytes of storage per month. Google Keep is less powerful, but a good alternative if you’re not willing to shell out any money for this service.

Many people turn to InDesign, part of Adobe Creative Cloud, when creating a layout for anything from a flyer to an ebook. If you don’t want to pay for a professional tool, however, you can accomplish pretty much the same thing using Scribus, a completely free and open-source design package. Versions are available for Mac, Windows as well as Linux.

Its reliance on drop-down menus is a little annoying at first, but you’ll soon get used to navigating these. Color management and typesetting are a breeze, and it contains most of the advanced features you may need – though importing a project from another program is a pain.

Staying safe online means (among other things) using a large variety of login credentials. Keeping track of these can get difficult unless you have an app like LastPass, which autocompletes website forms for you, generates secure passwords, and can be used across multiple devices. All you need to access your “vault” is a master password.

LastPass offers a high degree of security (though we should mention that they have gotten some stuff wrong in the past). In particular, all data is encrypted on your own device, meaning that not even the company itself can see your personal information. The free version doesn’t come with some advanced password sharing and authentication options, but should really be all you need.

A codec is a piece of software that defines how video and audio will be rendered; not having the correct one will often stop media from being reproduced correctly. With VLC media player, you’ll never have to worry about this: though compact, it’s known for handling all kinds of video files without a hitch.

In addition, it can also be used to render streaming media like podcasts and offers a wealth of playback options. Even better, this software is constantly being updated despite being totally free – recent features include virtual reality support and the ability to stream to other devices.

Numerous people have to work with audio and video files but can’t afford high-end editing software. Fortunately, there’s no need: free software is available to meet the requirements of any budding cinematographer.

Shotcut has improved greatly over its lifespan and now features an intuitive interface, a full set of customizable filters and effects, and the ability to export video to nearly any format. HDMI capture is supported, as is streaming from a webcam.

Audacity, too, is surprisingly easy to learn considering how much control it offers. Features include an extensive effect library, multi-track editing, and recording with sampling rates of up to 192,000 hertz. Common tasks like noise removal and fading can be done using simple wizards that walk you through the process.

Most people are very attached to their favorite browser, but new kid on the block Brave has a lot going for it. Built on top of the Google Chromium project, it includes an adblocker as standard, automatically refuses trackers, and incorporates a TOR browser.

Interestingly, it’s significantly faster than other browsers while also allowing you to use any Chrome extension. In case you want to support your favorite websites (who, of course, rely primarily on ad revenues), you can also opt in to something called the Brave Rewards program, which compensates website owners using cryptocurrency.

The importance of a good email client should never be underestimated. Thunderbird saves you time by showing you emails from several accounts in the same inbox, alongside news you subscribe to via RSS. Unlike the email program that comes standard with Windows, it allows you to save your messages to your hard drive so you can refer to them even without an active internet connection. This software includes a calendar as well as the ability to send large files as a link instead of an attachment. Numerous add-ons are available to enhance your experience further.

There are numerous “warez” sites on the internet where commercial software can be illegally downloaded, while many torrent sites provide cracked versions. However, this is not only illegal but also a good way to infect your computer with malware. Hackers often inject malicious code into these programs, even though your antivirus may not be able to detect it. The end result may range from data theft to your computer becoming part of a botnet and slowing down.

You don’t need to take that risk. Numerous legitimate websites can provide you with safe software for free or at a huge discount:

Use Free Software, Save Money

Owning a computer is hardly optional in the modern world. Unfortunately, the cost seems to keep piling up, especially if you insist on using premium software.

In many cases, you don’t need to spend a cent to get a program that lets you do something very similar. At times, you may be forced to watch a few ads, do without tech support or accept a bit of a learning curve, but free software is certainly out there.

Do you have any recommendations for free or cheap apps or online services? Please let the rest of the community know in the comment section; you may just save someone from making an expensive, unnecessary purchase.