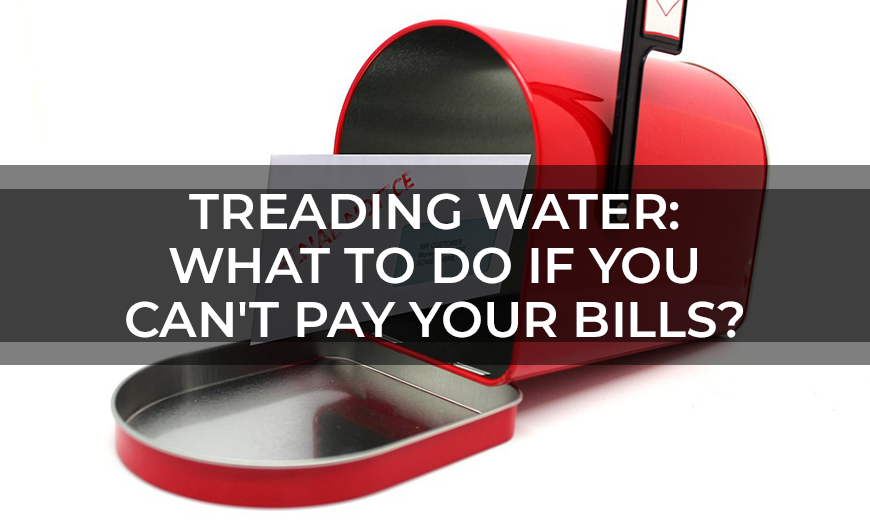 Sometimes, financial hardship creeps up on you, other times, it hits you like a ton of bricks. What’s certain, though, is that nobody is coming to bail out you and your family: that little stimulus check helps, but you should realize that getting out of a hole is something you’ll have to tackle yourself.

The next couple of weeks or months may suck, but don’t think that you’re helpless. You’re not alone, either: one in three of your neighbors are having trouble keeping up with bills. Some of them are going to make bad choices and end up worse off; you, hopefully, are already on your way to recovery.

The key is not to panic. Remember what the wise man said: being broke is temporary, but being poor is a state of mind. Poor people are going to be poor for the rest of their lives because they don’t strive to educate themselves and make better decisions. You, however, are going to take several deep breaths, spend a little time learning about your options, think rationally about where you are and where you’re heading, and get to work improving your situation.

Pick up the Phone

No landlord likes to hear that a tenant will be late with the rent, but they’re even less fond of having to call themselves to find out what happened to your check. Similarly, utility companies don’t like people that can’t pay right now, but you’re not going to be the only one. They really prefer someone asking about deferred payments rather than just disappearing into the woodwork.

This kind of thing will help you keep up your credit rating: know that there’s a big difference between someone who refuses to pay, and a person who just can’t right now and is willing to take the high road. When you ask around, you may also find sources of assistance where you least expect them: maybe reaching out to the government or renting out your spare room will help you get over this rough patch.

You should know that evictions have been suspended in most parts of the United States, while many companies have instituted special policies for the duration of the covid-19 crisis. They’re not going to seek you out, though, so make sure you contact them first.

Draw up an Emergency Budget

Hopefully, you already work from a household spending plan: seeing where your money goes every month is the first step to spending responsibly. However, if you’re really in dire straits, you can probably trim the fat a little more.

You can almost certainly spend less on food, and you don’t need to resort to an all-pasta diet to do so. Clothes shopping can be put off for a month or two, and you can probably cancel an online subscription or two without feeling the pinch.

Think very carefully about losing your insurance, however. Sure, it may be painful spending a few hundred dollars a month on something you might never need, but when you need emergency healthcare, you really, truly can’t do without it.

Look for a Second Source of Income

You may recently have been the victim of layoffs, had your hours reduced or just be struggling to keep your head above water. Whatever your situation, it’s an excellent idea to get an extra source of income as fast as possible, even if it’s not much. Every penny counts when you’re down to the wire.

Websites like Mechanical Turk and Fiverr make it easy to pick up a few extra bucks, especially if you have – or are willing to learn – a skill like graphic design or web development. Being under financial strain may even be an opportunity in disguise: many people only started flexing their entrepreneurial muscles when they had no other way of earning some income.

As many as 60 million Americans take some part in the “gig economy”: taking the jobs that appeal to them and charging fair market rates for their time and skills. You may be surprised at what kind of things companies are willing to pay top dollar for: do you know some software package inside and out, or perhaps speak a second language? Chances are that you’re feeling a bit low right now. Drawing up a list of your marketable skills and abilities may be all that’s needed for you to realize that you do have some options.

You don’t, in fact, need any kind of talent to start working for yourself. One guy I had the privilege to meet used his last $20 to gas up his truck, then asked his neighbors and local businesses if he could haul away their trash. Ten years later, he was known as the state’s “Trash King” and owned a fleet of trucks, all because he was willing to take the initiative and get off his posterior.

It can be tempting to just use your credit cards until things return to normal. Think long and hard before you do so, though: don’t let desperation push you into what can easily become a trap.

Around 190 million people in the U.S. use credit cards and collectively owe a staggering $1.08 trillion on them.

Instead, you should be taking an hour or two to see whether you can transfer your existing credit card balance to a bank that lets you pay zero percent APR during an introductory period. Alternatively, you can look into how a personal loan can help you weather the storm. If you’re not sure you qualify, you can ask for your Experian credit score, free forever.

One of the most common financial mistakes you can make is to borrow money or buy on credit while assuming that the good times will last forever. If you’re in that kind of situation, learn about consolidating your debt: just shaving a few percentage points off your monthly payments will already help put you back on track.

The Pros and Cons of Declaring Bankruptcy

If, once you’ve tallied up your assets, liabilities, income and expenses, you really can’t see any way out, declaring bankruptcy may be your only option. Depending on which kind you file for, this may mean a court-appointed agent selling off some of your assets and most types of debt being canceled.

Getting out from under your debt burden may seem appealing, but going bankrupt is neither simple nor easy. You will need to consult a credit counselor and probably a lawyer, and you will have a great deal of trouble borrowing any money for up to a decade in the future.

Getting a judge to approve such a drastic step is also not automatic. You will usually have to meet with your creditors and explain why you’re not in a position to repay them. Trying to hide any of your assets may actually land you in jail. Some types of debts, including alimony and student loans, aren’t affected by bankruptcy anyway.

Keep Your Cool When You Can’t Pay Your Bills

Realizing that you can’t cover your expenses can be traumatic, not to mention embarrassing. Don’t lose heart, though: a very large number of Americans are currently in the same position through no fault of their own.

Ideally, you’ll always have several month’s living expenses saved up. This isn’t always possible, but perhaps your current predicament will serve as a reminder that living within your means can prevent a whole range of problems. The lesson may be painful, but your current difficulties are only temporary. The more aggressively you can cut down on your spending, the sooner you’ll be back on top.

This will require you to be honest with yourself, especially about the things you like to have, but don’t really need. If you’re serious about making the best of a bad situation, you’ll also want to be forthright with other people. Honesty is really the best policy: you don’t need to pretend that everything is fine right up to the moment you stumble off a cliff. Your landlord, bank and even the IRS will more often than not be willing to work with you as long as you lay out your cards on the table.